“It’s time for Australia to create clear expectations for tourists about what is and what isn’t acceptable when visiting a rural property, including a vineyard,” said Inca Pearce, CEO of Vinehealth Australia. “There has been huge growth in tourist numbers to Australia in recent years, and we know from our own research and other reports that tourists are not aware of the damage they can inadvertently cause.”

In research commissioned in 2017 for the Responsible Visitation Campaign, Vinehealth Australia found that 44% of female visitors and 28% of male visitors to wine regions expect to be able to take photos amongst the vines as part of their wine tourism experience.

“The research we commissioned was eye-opening. Many tourists expect to be able to wander around the vines as part of their cellar door experience. But importantly, tourists say they wouldn’t enter vine rows if they were told not to,” Inca said.

“They say fences, signs and being told not to enter the vineyard by cellar door and visitor centre staff would be the most effective deterrents.”

For vineyards, the biggest risk associated with tourists walking amongst vines is the potential for spreading destructive pests and diseases, including phylloxera. South Australia is currently phylloxera free. “And there are also safety concerns – vineyards are working farms, containing dangerous machinery and equipment,” Inca said.

Vines are not the only crop at risk. The ABC recently reported that farmers in Queensland are seeing thousands of tourists stream into their sunflower fields, looking for a great photo.

“They do a lot of damage…knocking plants down, compacting the ground, breaking sunflowers off and taking them,” a grower told ABC. Read the full story here: https://www.abc.net.au/news/rural/2018-02-09/farmers-fed-up-with-trampled-sunflower-fields-for-selfies/9408878

This is forcing growers to think creatively about the best way to keep visitors out of their crops. “I have given up on the usual (biosecurity) signs around my vineyard and have one which has a picture of a tiger snake and it warns about the presence of snakes in the vineyard,” said David Lloyd, winemaker and owner of Eldridge Estate in the Mornington Peninsula. See below for an image of the sign.

“The need for national guidelines about visitor expectations in our regions is clear,” said Inca. “We will continue discussions with tourism groups and government departments to keep our industries safe.” 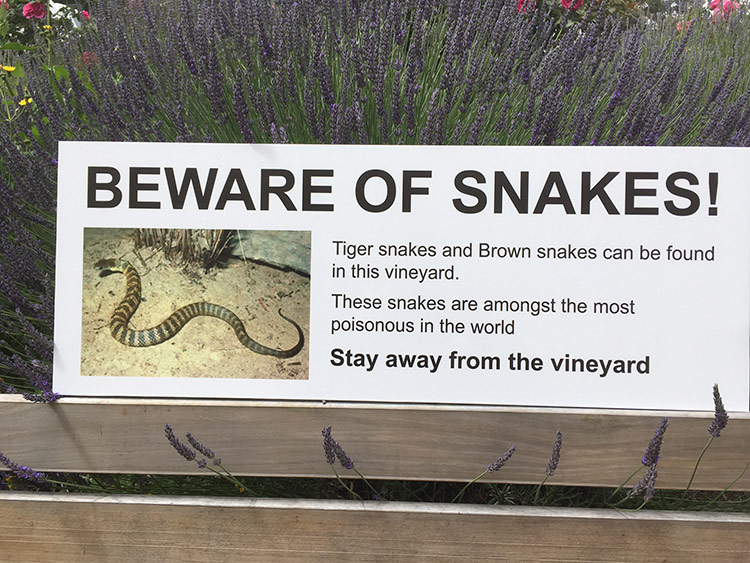