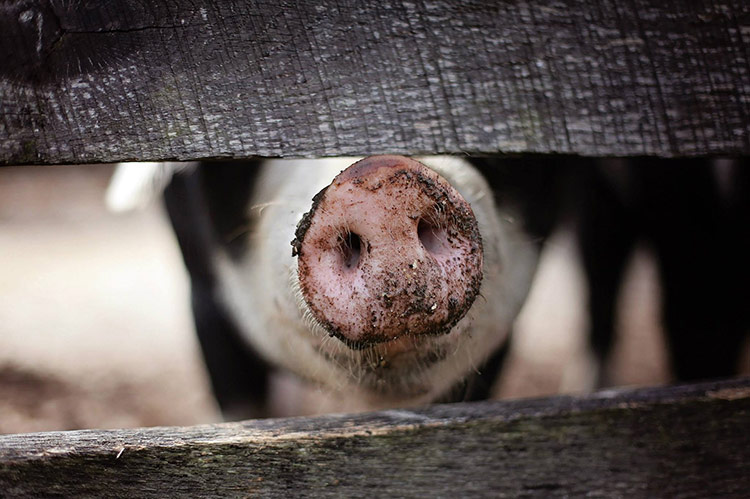 With news focused on COVID-19, it’s easy to forget about other biosecurity threats, including African Swine Fever (ASF). According to ABC reports (1), ASF has killed 800 million pigs, which is more than a quarter of the world’s pigs. Australian authorities and our pork industry are subsequently on high alert to protect our ASF free status, as the highly infectious and contagious disease nears our shores.

The latest outbreak on Australia’s closest neighbour, Papua New Guinea, reported by the ABC on 31 March 2020 (2), noted the death of more than 300 pigs in the country’s highlands. Quarantine areas have been set up there to ban the movement of pigs and pig products out of affected areas, but pigs are a central part of PNG’s culture, making enforcement difficult. As recently reported on landline, under strict quarantine measures, Australia is helping out its neighbour by undertaking sample testing for ASF in our laboratories (8).

ASF is caused by the Asfarviridae family of viruses of which there are 22 known types. It infects only domestic and wild pigs and a variety of soft bodied ticks. The virus is endemic in Africa south of the equator, in warthogs and bush pigs, but the infection in them produces no clinical disease. It circulates between warthogs and the soft bodied ticks which inhabit their burrows. The ticks transmit the virus through all stages of their life cycle and perpetuate it. ASF is also endemic in the domestic pigs of some African countries (5).

ASF does not pose a threat to human health but is a fatal animal disease, affecting pigs and wild boars with 100% case fatality rate for the most virulent strains. The virus is spread by direct contact with tissue and bodily fluids from infected or carrier pigs, including discharges from the nose, mouth, urine and faeces or infected semen. It can also be spread via pork products, feed, ticks, and infected equipment and vehicles, such as syringes, knives, pens and trucks. There is currently no vaccine for ASF and no cure.

A note from the Food and Agriculture Organisation of the United Nations (FAO) on their planned 2020 conference ‘African swine fever unprecedented global threat: a challenge to food security, wildlife management and conservation’ (6):

African swine fever (ASF) is an unprecedented animal health crisis. ASF is one of the most devastating diseases affecting pigs and there are no efficient prevention methods. The only means of its control is through the elimination of infected pig populations and strict control of movement of animals and pork products.

Outbreaks of ASF result in massive losses of swine and pork products, making it economically devastating in countries with developed commercial pig farming. However, countries with extensive pig production suffer from epidemics too, with implications for pork prices and availability, livelihoods, and securing investments. Around 43 percent of pigs are kept in extensive production systems with low biosecurity practices. Once introduced, ASF spreads quickly through human activities and quickly becomes endemic in domestic pigs. Extremely challenging is the capacity of the virus to circulate in populations of wild boar, and via ticks. ASF virus is resistant and remains infectious for months in pork products and more than 1000 days in frozen pork. Humans play a major role in short and long distance introduction and spread of the virus.

Historically, ASF outbreaks have been reported in Africa and parts of Europe, South America, and the Caribbean (7), but the rate of spread of ASF has been more rapid and far-reaching of late. In 2007, the virus had spread to 17 countries across Europe and in 2012, almost half of the pig producing countries in Africa reported outbreaks, with serious negative impacts on production, affecting livelihoods, food security and nutrition. In August 2018, ASF emerged in China (where it is claimed that an estimated 350 million pigs were killed (8)) and since has been introduced to Mongolia, Vietnam, Democratic People’s Republic of Korea, Cambodia, Laos, Myanmar, The Republic of Korea, Timor Leste, Indonesia(6) and now, Papua New Guinea.

While people cannot contract ASF, they can be responsible for spreading it. The virus can be picked up and spread on clothing and boots and spread long distances through movement of contaminated pork products, even if they have been cooked, dried or frozen. For this reason, tough national border controls and good farm-gate hygiene practices are vital in preventing ASF from reaching our 2,700 pork producers; an industry worth $5.2 billion annually to the Australian economy (8).

Despite the Australian Government placing a ban on the import of pig products from countries infected with African swine fever, between February and September 2019, border officials confiscated 27 tonnes of pork products at Australian airports, which can still be infectious for ASF for up to two years (3). In December 2019, the Government announced a $66.6 million ASF response package, which included increasing screening rates at international airports, increasing detector dog and frontline biosecurity staff levels, introducing new x-ray machines in key mail centres and increasing the checking of imported pork products for fraudulent labelling (4).

Contingency plans have also been put in place, including zonal management of production areas to facilitate continued export market access for Australian pork producers, addressing Australia’s feral pig population (estimated at between 15-25 million (8)), identification of potential mass burial sites and consideration on how pig carcasses might be disposed of without risking soil and water contamination.