Grapevine Pinot Gris Virus (GPVG) is a new to science pathogen, first described in Italy in 2012 and subsequently reported in many other countries across Europe, Asia and North America. Diagnostic capacity became available in Australian laboratories in 2015. In late 2016 and in subsequent surveillance undertaken in 2017, the virus was detected in Australia in multiple wine grape varieties and one table grape variety across three states.

Click here for the GPGV fact sheet produced as part of this project.

Click here for the GPGV article on this project that appeared in Wine Australia RD&E News February 2019 issue.

Click here for the GPGV article on this project that appeared in the Australian Grapegrower & Winemaker March issue (in print). 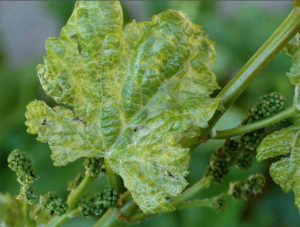