Howe Farms is the largest employer on the Atherton Tablelands in Queensland, with 420 employees assisting with the production of bananas, peanuts, avocados, sugar cane, corn and blueberries across 2,600 hectares. In fact, Howe Farms is the second largest banana grower in Australia with bananas accounting for 75% of total farm income.

Inca Pearce, CEO of Vinehealth Australia, spent an hour with Dennis Howe, owner, and Kimberley Mastin, general manager, earlier this year, discussing how the incursion of Panama TR4 close by in Tully has affected their operations. TR4 was first detected in Australia near Darwin in 1997 and subsequently in Queensland in Tully in 2015.

Panama disease is caused by the fungus Fusarium oxysporum f.sp. cubense. Topical Race 4 (TR4) of the disease infects most varieties of bananas, including the main commercial variety, Cavendish.

The fungus blocks the water conducting tissue within the stem and essentially starves the plant of water[1]. It is easily spread by infected planting material, root to root contact of an infected plant with an unaffected plant, or from infected parent plants to suckers. The fungus can also be moved by soil, water or contaminated equipment.

Since March 2015, more than 1,528 suspect plant samples for Panama disease TR4 have been processed by the Biosecurity Queensland laboratory.

Dennis said that prior to TR4, biosecurity was considered a risk to their business, but it didn’t seem an imminent threat.

Since the TR4 Tully incursion, Howe Farms has researched and implemented cutting edge biosecurity practices, which are integrated into their everyday operations, such as:

Howe Farms has implemented a rigorous method of ensuring footwear of employees is clean and disinfested at packing shed properties.

Inspired by other farmers in the region, they have customised a shipping container and cut doors into either end. They have installed boot racks on either side of the long walls, and a large bench running down the middle, splitting the container into two lengthwise. When employees arrive, they park their cars on the hard pack carpark, enter the shipping container, sit on the bench, take off their shoes, put them on the rack, swivel their bodies to the other side of the bench, take white boots off the rack, put them on, then exit from the other end of the shipping container, through a grated walkway with an in-built foot disinfestant, before entering the packing shed.

The white boots are only for use in the packing shed. If the worker then needs to go into the farm or plantation they repeat the above process but through another customised shipping container that allows them to change from white boots to black boots and again walk through a grated walkway with an inbuilt foot disinfestant.

“This clever customisation of shipping containers demonstrates how you can easily and seamlessly integrate biosecurity practices into everyday operations,” Inca said.

“The implementation of these measures has resulted in a significant change in culture towards biosecurity by most North Queensland banana farmers including Dennis – it’s now becoming standard practice in the region.”

Dennis said many banana farmers in the region were working hard on biosecurity. At Howe Farms, biosecurity management is a work in progress and Dennis and his team will continue to look at ways of improving their operations.

“We’ve spent a significant amount of money so far setting this up,” Dennis said. “And there are ongoing operational costs of implementing biosecurity practices every day, which adds about 0.30c to 0.40c to a 30-40kg bunch of bananas.

“But the cost of implementing these practices is nothing compared to what an incursion of TR4 would mean for my property. It was an imminent threat to my entire property and high risk and now it’s a managed risk. And if we did get an incursion, I’m in a far better position to contain the fungus and to minimise the impact on my entire business.”

Dennis was recently named a ‘farming legend’ at the ABC Rural-Kondinan Group’s annual farmer of the year award. 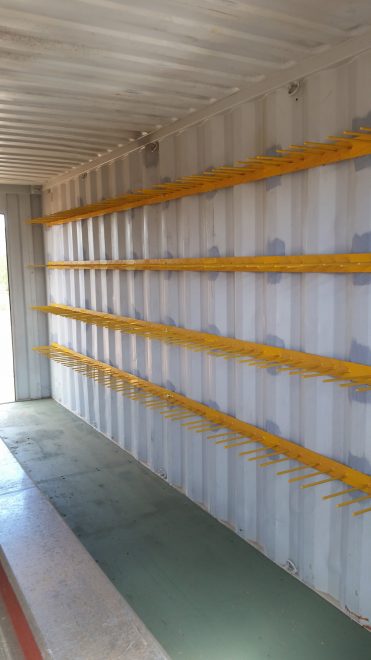