Spotted wing drosophila (SWD, Drosophila suzukii) has been classified as a high priority exotic pest threat of the Australian viticulture industry. It is a temperate to subtropical species of vinegar fly native to Southeast Asia, and now widespread in Japan, China and Korea.

It is an emerging invasive pest that is currently undergoing a rapid range expansion in North America (it arrived in California in 2008 and by 2012 has spread to 27 US states) and Europe (it first arrived in Italy in 2009, then spread to Spain, Portugal, France and Germany in 2010 and Switzerland, Croatia, Austria, Belgium, England and Netherlands in 2012).

Although most other vinegar flies are attracted primarily to damaged, rotting or fermented fruit, D. suzukii is able to attack the fresh, ripe fruit of some hosts by laying eggs under the soft skin. The larvae hatch and grow in the fruit, destroying its commercial value (Berry, 2012). SWD are generalists which means they can jump from host-to-host (across a wide host range) throughout the year depending on ripening fruit availability (Gratton, 2013). Vitis vinifera are one of the preferred hosts for egg laying in healthy, slightly under-ripe fruit, especially thinner-skinned grape varieties.

Adult SWD are 2-3 mm long with a wing span of around 6-8 mm. The wings display distinct and sharp cross veins. SWD are golden brown with dark contiguous bands on the abdomen and prominent red eyes.

Females have a large double-serrated ovipositor that is used to puncture the intact skin of suitable fruit and lay eggs. Males are typically smaller than females, and can be distinguished from females by the small dark spots on the wing tips. This feature is not shared by the common vinegar fly which looks almost identical to the SWD. Larvae of the SWD are cream or white and about 3 mm long (Plant Health Australia, 2013).

Under ideal conditions, the SWD has up to 15 generations per year and its lifecycle can be as short as 10 days. Flies are active above 10ºC (EPPO, 2010).

How does it spread?

Adult SWD can spread throughout a crop through flight, but longer distance dispersal occurs through movement of plant material (primarily fruit) infested with eggs or larvae.

What to look out for

Infested fruit show small scars and indented soft spots on the surface, which is left by the ‘stinging’ (ovipositing) females. Larval feeding results in the fruit collapsing around the feeding site. If the attack rates are high by SWD, the entire fruit can collapse. The oviposition scar also exposes the fruit to secondary attack by pathogens and other insects, which means detection of fruit rot caused by secondary infection by moulds and bacteria might be the first warning sign of infection.

What can it be confused with?

The adults are easily confused with the Common fruit fly (vinegar fly) (Drosophila melanogaster). The image below shows the relative body lengths of the Spotted wing drosophila compared to other Australian fruit flies of note. 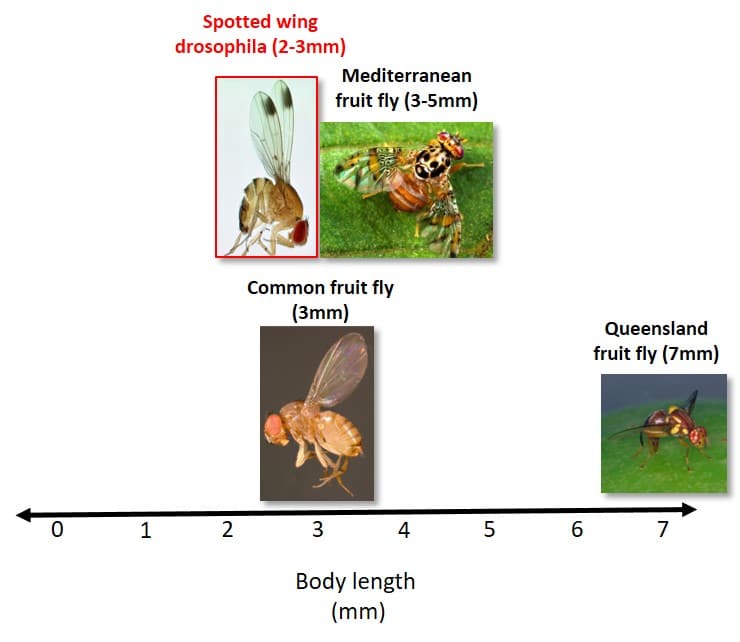