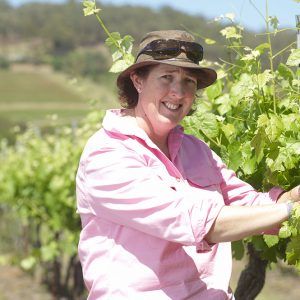 Few in the wine industry were surprised when Liz Riley was named ASVO Viticulturist of the Year last month. Liz’s 25 years of service to the viticulture industry is well known.

Liz runs Vitibit, a viticulture consultancy company based in the Hunter Valley, and travels around the eastern states providing technical assistance to vineyard owners.

And Liz thinks the Australian wine industry needs to lift its game when it comes to biosecurity.

“I see first-hand the complacency out in the industry when it comes to biosecurity,” Liz says. “The risks are huge. Transport is easier and cheaper. It’s so quick to get around Australia now. You can be in the Hunter in the morning, travel to the Yarra and be back in the Hunter that night.”

Liz says she is rarely asked to change her shoes before walking into a vineyard.

“I know the risks, so I always carry a set of ‘away’ boots and ‘home’ boots. And both sets are disinfested regularly,” Liz says.

Liz says the implications of spreading phylloxera to a new region are scary. “And I can see how easy it would be to spread phylloxera or other bugs though the movement of bins, machines and fruit if people aren’t being careful,” Liz says. “A breakout of phylloxera during vintage would bring a region to its knees.”

Liz says, like any part of running a business, best practice biosecurity is about understanding risks and managing them the best way possible.

“I think some of the younger people who have come into the industry in the past 10 years are a particular risk,” Liz says. “I see young winemakers on social media travelling all over the place, in and out of PIZ and PEZ regions, and I wonder whether they even think about biosecurity. Do they change their shoes? Do they take vine material? As an industry, we need to ensure the young people entering the sector understand the risks.”

Liz’s advice for growers? Implement basic farm-gate hygiene practices. And get to know your vines. “The more you look at your vines, the more you’ll know what’s normal and what’s not normal,” Liz says. “Take photos so that you can check symptoms with experts. Your phone is probably your most important vineyard tool.”

This is part of series of case studies where we look at best practice biosecurity philosophies implemented in agriculture. Would you like to be featured in a case study? Email your details to Cindie Smart at communications@vinehealth.com.au.