Dr Nuredin Habili from Waite Diagnostics – AKA the virus guru – is creating a series of short articles for Vinehealth Australia, to improve grower knowledge of viruses. Here is his first article.

These days we hear a lot about viruses, the agents that attack biological (cellular organisms) and non-biological objects (computers) via “vectors” or “hackers”, respectively, and cause infections. During the era of cyber weaponry, the term “virus” has gone viral and is used everywhere. Here, I concentrate on agents that invade biological organisms, not PCs.

All cellular organisms, from bacteria to humans, are invaded by viruses, however it was a plant virus that triggered the study of the virus. The secret life of viruses was first unravelled by the discovery of Tobacco mosaic virus (TMV) in the late 19th century. The discovery of TMV still stands as the milestone in virology history which we will briefly discuss here.

In 1892, Dmitri Ivanoski (1864-1920), a Russian microbiologist, reported that extracts from infected tobacco leaves can still be infectious after being passed through a filter that stops bacteria. This was the beginning of the understanding of the secret life of filterable pathogens (viruses). Soon after, in 1898, Martinus Beijerinck (1851-1931), a Dutch microbiologist, introduced the term “virus” and the “discipline of virology” into the biological world. He thought that the filterable sap was a poison (virus). A step forward in the discovery of plant viruses was made in 1929 when Francis O. Holmes of Boyce Thompson Institute for Plant Research (New York) showed that TMV could produce small necrotic lesions on tobacco leaves in a proportion directly related to the dilution of the sap (inoculum). This assay provided the first evidence that viruses are sub microscopic particles with unique physiochemical properties. Geoffrey Samuel and Rupert Best (1934), two plant virologists at the University of Adelaide’s Waite Campus were the early virologists who purified TMV and studied its biochemical properties.

In biology, viruses are transmissible parasitic biochemical molecules made of protein and a genetic material (DNA or RNA) (Figure 1). They were first noticed because of their association with previously unexplained infectious diseases, such as polio and rabies in humans, and abnormalities in crops. Around 8,000 viruses have been discovered which can cause disease in all forms of life including crop plants. They show different strategies for spread, mainly via insect vectors, and expressing their genetic material following entering the host. They have adapted to their specific host organisms, using their own genes to take over and control the metabolism of their host. Since viruses live within the cells, no chemical spray is effective against them.

Each crop species has its own specific virus species and shows various levels of sensitivities. Citrus Tristeza virus has destroyed more than 50 million trees in the past 40 years, mainly in Brazil. This virus is a close relative of Grapevine leafroll-associated virus type 2. The grapevine is invaded by many viruses as compared to other crops. Nearly 65 viruses have been reported from the grapevine, although most of them are symptomless and inert viruses. Fanleaf, Leafroll and Rugose wood are the major virus diseases of the grapevine which can cause considerable yield loss (Table 1). Viruses such as Red Blotch and Leafroll can also have large negative impacts on grape quality. We will introduce major grapevine viruses and discuss their diagnostics and management strategies in more detail in the future. 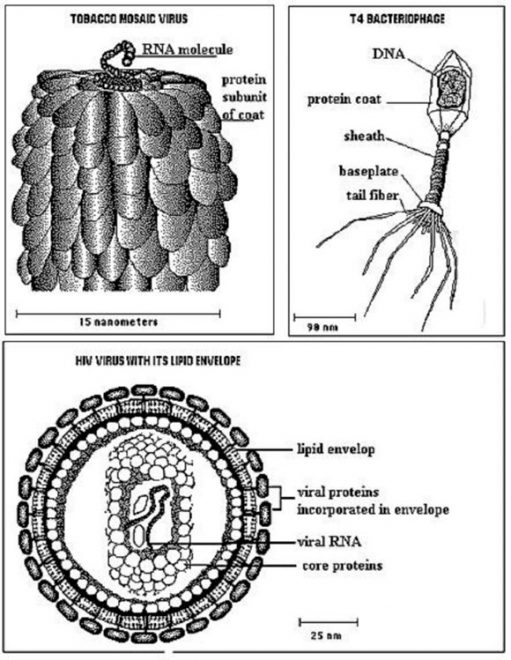 Figure 1. Viruses come in various shapes and sizes, but their size is much smaller than the cell they invade (around 0.1 micrometre). Top-left: Tobacco mosaic virus; top-right: T4 bacteriophage (the viruses of bacteria) which infects E. coli. A particle of HIV is shown at the bottom. The genetic material (DNA or RNA) is located within the particle and wrapped by the coat protein (Image courtesy Access Excellence @ the National Health Museum).

We have a long list of topics for future articles, but if there’s something you really want to hear about viruses, please let us know via email at . Dr Nuredin Habili is an experienced plant virologist with more than 20 years’ experience working with plant viruses. Through Waite Diagnostics he offers virus testing to customers all over Australia, as well as the United States of America, New Zealand, Germany, Argentina and South Africa. For further information, please contact Dr Nuredin Habili, Waite Diagnostics, School of Agriculture, Food & Wine, The University of Adelaide at Nuredin.habili@adelaide.edu.au