If you’re in or near a Phylloxera Infested Zone (PIZ), it’s important to understand which phylloxera strain is present, to enable best rootstock selection. In addition, identifying phylloxera down to the strain level can help link new infestations to their source.

Vinehealth Australia is a strong supporter of research into phylloxera strains, rootstock testing and disinfestation techniques to ensure Australia has a rigorous system for the prevention of further phylloxera spread.

Grape phylloxera (Daktulosphaira vitifoliae) is native to eastern North America, first affecting European Vitis vinifera in the late 19th century. There have been several hundred genetic strains of the pest documented worldwide, of which Australia is known to have 115 strains identified using DNA typing.

Where are the various strains found in Australia?

At present, these endemic strains are confined to eight geographic regions in parts of Victoria and New South Wales (refer Figure 1). Clonal lineages are found in different regions and within these areas. Grape phylloxera in Australia are thought to be genetically identical to their parents as there is no evidence yet of sexual reproduction occurring and therefore no evidence of new strains evolving. This suggests the historical introduction of these separate lineages of phylloxera and has important implications for management of this pest. Strains G1 and G4 have been found to be markedly different genetically and also biologically from other genetic lineages (Umina et al., 2007; Herbert et al., 2010). 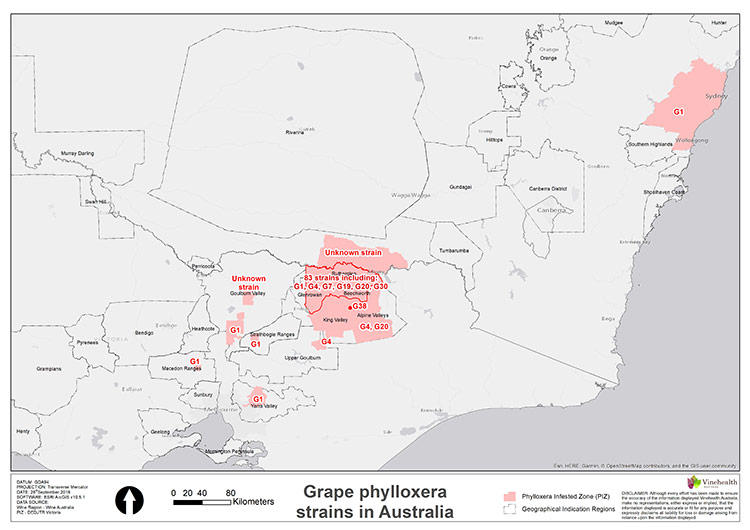 Why is it important to know the strain?

As a grower, it’s important for you to know which phylloxera strain has been found on your property, in your region or in a region close to you, to enable an appropriate rootstock selection to be undertaken (also considering all other attributes such as drought tolerance, nematode tolerance and salt tolerance), based on knowledge of phylloxera strain-rootstock interactions. In addition, identifying phylloxera down to the strain level can help link new infestations to their source.

Phylloxera strains come from different genetic lineages, are of different virulence (or aggressiveness) and are potentially suited to slightly different environmental conditions. Therefore, current rootstock testing to date has been conducted using seven strains – one of each of the strains of the various known lineages of our endemic strains, including G1, G4, G7, G19, G20, G30, G38.

Results from this rootstock testing are summarised in Table 1 and adapted from work completed by Powell and Krstic (2015) and reported by Dry (2007). Other than own-rooted Vitis vinifera which is susceptible to all endemic phylloxera strains, many rootstocks are tolerant to phylloxera where the phylloxera can still feed and reproduce on the roots but in lower numbers than on own roots and therefore the vine is not debilitated.

Only some rootstocks convey true resistance to phylloxera where the phylloxera cannot develop beyond the first instar to the adult stage and cannot therefore lay eggs. The variability of these results indicates that resistance results undertaken overseas are unlikely to provide definitive results for phylloxera populations in Australia and therefore a continuation of testing using endemic strains is vital. 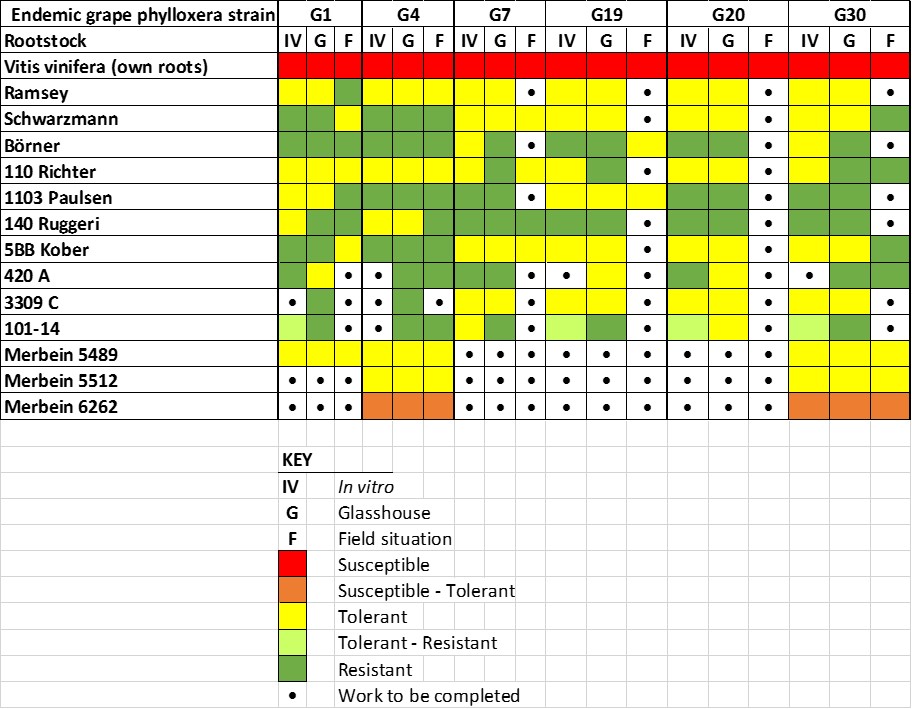 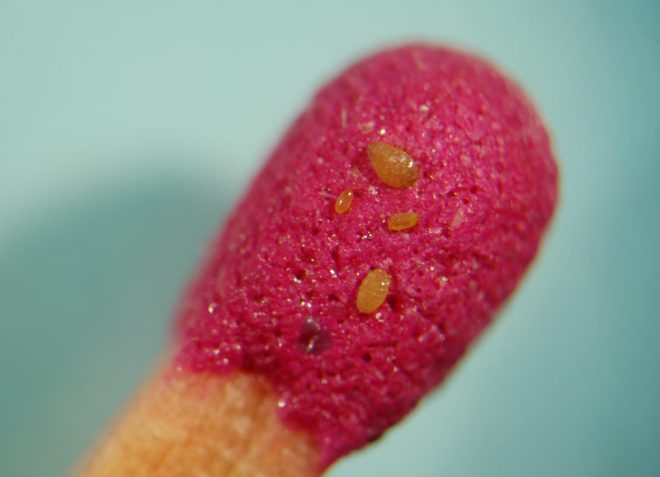