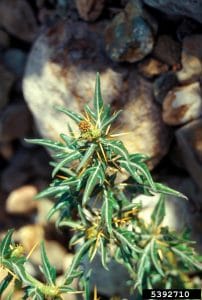 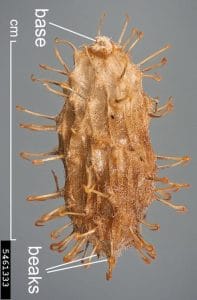 Bathurst Burr, a native of South America, is an erect, branching annual summer-growing weed that grows to 30-60cm high and produces spiny burrs. It is a pest plant in pastures and degrades wool quality. The burrs are usually produced in late summer and autumn and are covered with slender yellow hooked spines. Burrs irritate the hands of shearers and can break the combs of shearing machines. Bathurst Burr can infest irrigated horticulture crops, such as grapes and tomatoes, where the burrs are a nuisance to pickers. Seedlings are poisonous to most stock animals.

This weed prefers highly fertile, disturbed soil such as near dams, watercourses and floodplains. Burrs attach to the fur and wool of animals and are readily transported by stock, and can be easily carried on clothing, packaging and water. Common infestation areas include stockyards, camps, roadside drains and overflow areas around troughs.

Successful control requires treatment of seedlings and the following germinations. It is important to keep Bathurst Burr off clean properties or to recognise and destroy new infestations before they become established. 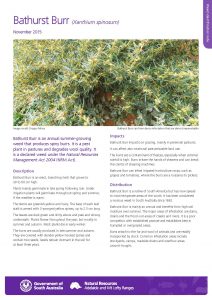