Recent studies have shown that a 60 second treatment is required to demonstrate 100% mortality across six key strains of phylloxera. Dr Kevin Powell reports.

Management of phylloxera in Australia is predominantly through quarantine procedures involving thorough disinfestation and cleaning of all items that come into contact with infested vineyards to minimise the risk of spread to non-infested vineyards.

However, the current National Phylloxera Management Protocol (NPMP) was written prior to our understanding of strains in Australia. It’s now known that in Australia, there are 83 phylloxera genetic strains.

(i) Identify the optimal sodium hypochlorite concentration and duration required to achieve 100% first instar mortality for all six genetic phylloxera strains; and

These findings underline the importance of carrying out footwear and small hand tool disinfestation at the correct concentration and duration, without a rinse thereafter, to ensure the effectiveness of the treatment.

Work continues in the search for effective alternatives to sodium hypochlorite.

For the current footwear and small hand tool protocol on which this work was based click here: https://vinehealth.com.au/media/Vinehealth-Footwear-and-Small-Hand-Tools-Disinfestation-Protocol-White-A3.pdf 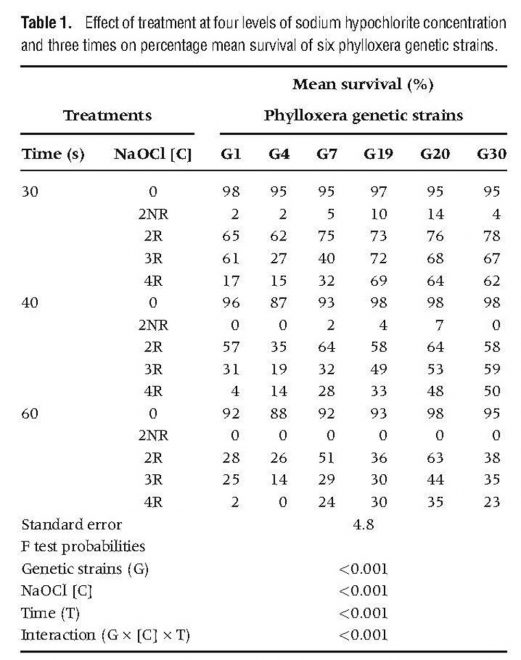