The pilot groups have about 85 vineyards collectively and 130 separately fenced vineyard sections involved in the trial, which will run until the end of June.

Project Boundary Rider is partnering with Canadian company, ‘Be Seen Be Safe’ to assess the application of geofencing technology to monitor and manage people movement in and out of properties.

“Geofencing involves placing a virtual boundary around a vineyard. When this boundary is crossed – either into or out of the property – by someone carrying a smartphone enabled with a customised app, it triggers a push notification to be sent to both the property owner and to the person who has crossed the virtual boundary,” says Vinehealth Australia Technical Manager Suzanne McLoughlin who is coordinating the project. “This push notification message can be customised to instruct the person on how to comply with the owner’s farm-gate hygiene practices.

“To date we have recorded more than 13,000 movements across the geofences in the pilot. These movements have been consolidated into electronic visitor logbooks for each vineyard owner, with records showing who has gone in and out and when.”

During May, pilot growers will be sent a survey to complete and in early June Vinehealth Australia will hold a meeting in each region to discuss results of Project Boundary Rider.

“We’ll also be able to show the power of the track and trace capability of this software simulating pest and disease incursions, using movements logged in the six months of the pilot,” Suzanne said. “These simulations will track the movement of a vector from an initial incursion point and provide a summary of geofenced areas that are subsequently infected and the list of people that are vectors.”

A pest or disease incursion has the potential to spread rapidly from vineyard to vineyard, given the vast connectivity between individual businesses through contractors, grape purchasers, carriers, consultants and researchers.

“This connectedness obviously leaves growers at a heightened risk of pest and disease spread in the event of an incursion,” Suzanne said. “We hope these simulations help to evaluate the potential of this software to provide growers with a greater understanding of their risk of a pest or disease incursion given current farm-gate hygiene practices.” 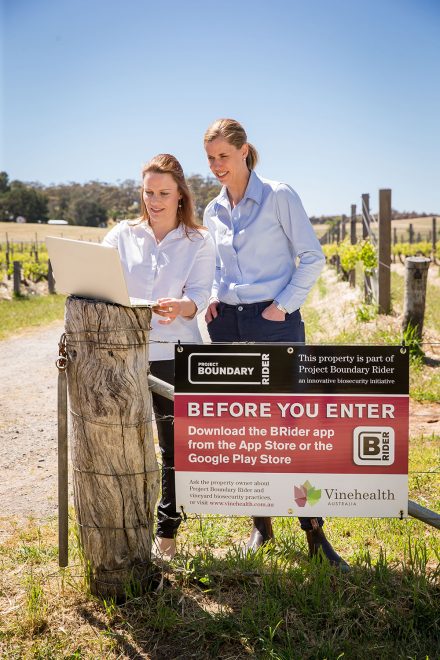